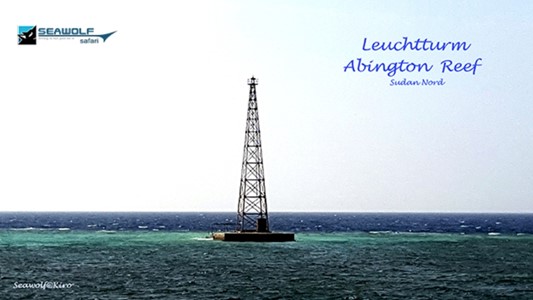 About 4.5 nautical miles east of Jazirat Bayer lies Abington Reef. It is part of a small chain of reefs that are far offshore from the mainland coast and rise like needles from the seabed, which is over 500 meters deep.

The Abington Reef has a triangular shape and slopes almost vertically down the sides. The corners are joined by plateaus of different sizes. The largest and most lush is the western one. The reef is easy to spot from afar thanks to its unmanned 30-meter high lighthouse. It consists of a metal framework standing on a rectangular concrete foundation. The tower serves as a resting and feeding place for seabirds. The chopped up tritonshorn snail shells at the base of the tower bear witness to this. At night, the signal light can still be seen at a distance of 20 nautical miles. Due to the exposed location, strong currents must be expected.
South wall with west plateau
The reef wall drops vertically on this side at depths of 20 to 25 meters and turns into a slope below. In shallow water up to 4 meters it is covered with small canyons, overhangs and tunnels. This section also invites snorkeling.
In the deeper part of the reef wall, large groupers lie in crevices. Shoals of vermillion seabass keep close to the reef. There is little else of interest to be found in the crevices, but the incoming rays of the sun often create a bizarre sight. Soldierfish seek cover in the caverns, some of which are quite large.
Below the slope begins a drop-off, on whose vertical wall huge gorgonians stick their fans into the current. The west plateau extends in a range from 25 to about 30 meters. The end drops off steeply into the deep blue. At its base is a large table coral, under which there is usually a large grouper. The bottom is covered with smaller coral blocks, between which one or two whitetip reef sharks rest from time to time. Striking are the numerous wire corals. A large school of barracudas often circles above the plateau.
North plateau with west side
The plateau consists of two levels. The upper one is at 5 meters, the lower one at 15 meters and descends rapidly to a depth of 25 meters. It is beautifully overgrown and covered with larger coral heads. On the outer edge patrolling whitetip reef sharks or grey reef sharks can be encountered.
On the plateau there is often a strong current, which makes it difficult or impossible to stay. In this case the dive can be continued relaxed on the not so current-rich west side. The reef wall drops vertically to 35 to 40 meters. It ends in a small slope under which a drop-off begins. It extends beyond the recreational dive limit. The wall is covered with numerous leather corals, and at the southern end a small group of napoleons make their circles. At a greater distance, shoals of spiny mackerels pass by and offer underwater photographers a nice subject.
East side with southeast plateau
Because of the current on this side a drift dive is possible. If the current comes from the south, you start at the small southeast plateau. This drops quickly down to 35 meters and then turns into a vertical wall with many gorgonians.
The eastern side of the reef is very craggy and offers its inhabitants numerous opportunities to seek shelter. Shoals of blue-striped snapper and spiny mackerel stand in the current. However, the diver should definitely not miss to peek out into the deep blue. Large pelagic fish, such as hammerhead sharks or gray sharks pass by here.