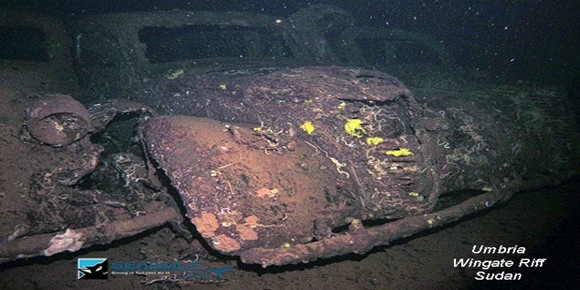 Wingate Reef is located in the harbor entrance of Port Sudan. It became famous through Hans Hass, who dived there in 1948 on the sunken "Umbria".

Despite the dangerous situation in the harbor entrance of Port Sudan, the "Umbria" is not salvaged. A no-go zone is declared around the wreck with some of its davits still sticking out of the water and it is then left to its own devices.
Nine years after her sinking, the "Umbria" arouses the interest of Hans Hass, then 30 years old. His contacts with the governor of Port Sudan finally enable him to dive on the "Umbria".
His photo and film material contributed considerably to the myth of the wreck. In the meantime, the "Umbria" is one of the most famous wrecks in the Red Sea.
Located within sight of Port Sudan, it usually marks the beginning or end of a diving safari. Even though the collecting madness of many a diver has left its mark here, the old lady with the explosive cargo has lost none of her charm. The sinking site can be easily identified by the four davits sticking out of the water on the starboard side. The sediment-rich bottom, the immediate location to the harbor entrance, and the low currents often contribute to reduced visibility.
The wreck lies at an angle of 75° to the port side. The three forward holds adjoin the intact bow. Amidships are the crew quarters and the bridge. Towards the stern, two more holds and the aft deck follow. Both the cargo holds and the midship superstructure can be comfortably explored.
However, due to the extreme inclination and the dangerous cargo, extreme caution is advised when touching objects. If you approach the bow of the "Umbria" from the open water, the steeply rising bow with the flagpole stands out mystically in the greenish water.
The two anchor chains run to the bottom, as the "Umbria" was at anchor when she sank. The anchor winch and the railing are covered with coral.
Some of the deck planking is still in surprisingly good condition. The small cargo hatches are an indication of the ship's age. The first hold, accessed from the foredeck, contains the omnipresent munitions, wooden crates, electrical equipment and aircraft tires. The second, somewhat larger hold contains bombs, grenades, and stick grenades. The detonators, which are stored separately from the explosives, are scattered in almost every hold. The third hold is one of the most visited.
Besides cement bags and other building materials, wine bottles and jam jars are found here.
Through a narrow passage on the port or starboard side, the first cargo level leads to the midship area, where three vehicles are parked.
The Fiat 1100 Lunga were specially designed for off-road use in the Italian colonies. Unfortunately, several divers have already left their marks on the vehicles. The fine sediment makes visibility drop to zero after only a short time, so if possible this part of the ship should be visited with small groups at longer intervals. The midship section with the bridge and its superstructures can easily be explored by snorkeling. On the starboard side 4 empty davits protrude from the water. On this side is also a single bathroom with toilet, bathtub and an enamel sink.
The massive engine room is accessed either through one of the open skylights behind the funnel or through the workshop accessible from aft. The multi-level room is easy to dive in the upper sections, while the lower ones are reserved for experienced divers.
Grates border the numerous aggregates. On the seabed toward the port side of the superstructure are wind scoops, cargo booms, the broken chimney, and a lifeboat. Towards the stern, two more cargo holds are connected. They are partly covered by the fallen derricks. As in the front holds, munitions, construction material and various war equipment can be found here. The single-story superstructure between the fourth and fifth holds houses the galley and some stores. The stern is now without planking. The red soft coral on the railing as well as the deck strutting provides the necessary color. The steering gear and the exposed steering chain are clearly visible. Below the railing, the huge rudder blade and the starboard propeller are impressive. The port propeller has sunk into the floor. Beneath the rudder blade is a huge artificial cavern that can only be exited through two exits. The twilight contributes to a mystical atmosphere..