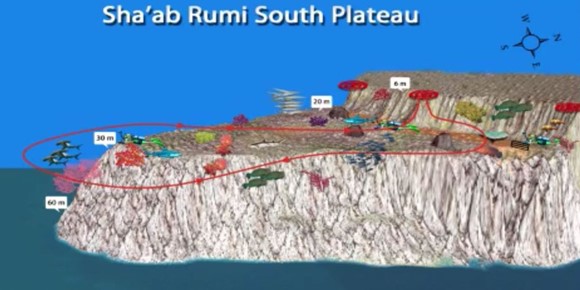 One of the most beautiful dive sites in Sudan, some say in the entire Red Sea, is this plateau.

There is a diversity of colors and species that make this dive an unforgettable experience. The reef wall is craggy on the upper 15 to 20 meters and forms numerous caves and crevices. Below this is the tongue-shaped plateau, which descends to 30 meters. Parallel to its base is a small channel. The outer side, covered with numerous hard corals, slopes steeply into the depths.
The southwest tip forms an attraction of this site: A school of scalloped hammerhead sharks frequently patrols the open water. If you dive out into the blue a bit, with a little luck you can observe these reserved sea creatures.However, care should be taken not to swim frantically towards them, otherwise the shy hunters will quickly return to the depths. But be careful: the current can pull you very quickly into the open water without giving you the chance to reach the reef again under your own power.


After a trip to the southern tip, the plateau can then be explored in all its glory. In the center is a mushroom-like, beautifully overgrown coral block. The bottom is covered with gorgonians, leather corals and stony corals, where scorpionfish are lurking for prey swimming by.


At the eastern plateau approach lies an old shark cage, which belongs to the Precontinent II project. Next to it is a plaque commemorating an Austrian diver who died in an accident in 1993.A very trusting school of sweetlips makes this spot a dream for every underwater photographer. With a trained eye and a bit of luck you can also spot a stonefish, which is well camouflaged and lurking for prey.In the shallow area you may encounter grey reef sharks, which move together with white tip reef sharks over the plateau. Sometimes dolphins also pay a visit to the reef.