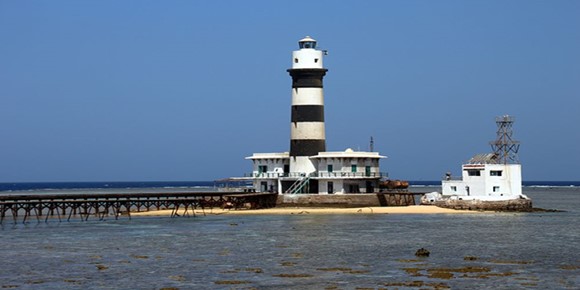 This site is located 5 to 8 hours east of Marsa Alam and is best known among divers for its stunning schools of hammerhead sharks. There is also always a chance of seeing thresher sharks on the southern plateau. However, the steep walls and notches of Daedalus form an extremely varied reef structure and give shelter to all kinds of fish species. This alone makes this reef an absolute must see!

1.Sharks in the morning 2.Plateau 3.The west side with the anemones

Sharks in the morning

With the Zodiac we go to the north. Depending on the waves, this can be quite bumpy. Expect currents and fast descents. Even in blue water, always take the reef as a reference and be patient - you will have a "hammerhead" beautiful dive.

A reef edge covered with soft corals extends over the entire south side, which merges into a beautiful wide plateau from 18 to 20m. The entire southern area is bounded by a drop-off ledge that slopes down about 35 to 40 meters. Always pay attention to the current here too!

The west side with the anemones

The west side consists of a wall that drops down to 70 meters. Here you can find everything that lives on drop-offs. Among others also an anemone field with over 200 anemones. With the main current from the north, it is advisable to let the Zodiac drop you off in the last or second last lagoon and drift south.