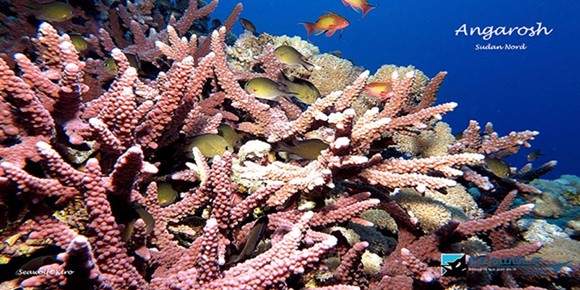 The "mother of sharks", this is the Arabic translation of Angarosh, one of the most famous dive sites of the Sudan. As the name says, encounters with the great hunters of the seas are the norm. It is hardly possible for the diver to escape the fascination of an encounter with these elegant swimmers.

The Island, that is sticking only a few meter out of the water, has an elongated shape and is located 2.5 nautical miles south-southwest of Abington reef.
The surrounding reef has a more triangular shape and falls at the outside steeply into the depths.
At the southern end there is a small, on the northern end a large plateau. Both places are known for possible encounters with different shark species. The number of animals is depending on the season and the water temperature.
The reef is penetrated by many small incisions, which extend deep into the reef. Because of the exposed location strong current must be expected. This is also a reason that strikingly large schools from various pelagic fish can be found.
At the whole reef the species richness of the Red Sea with its hard and soft corals and its many inhabitants is shown. The diver is provided with overwhelming abundance of underwater life.
North plateau with East Side
At the north end, pointed to the north-east, a large plateau is located. On its start at 18 meters depth there is a large cave in the reef wall which is courageously defended by two couples of clown fish.
The plateau decreases uniformly to 30 meters in order to continue after a step in 40 meters.
Beyond the sport diving limit his tip vanishes steeply in the deep blue. The sandy bottom is covered with many small, overgrown with soft corals, stone heads. Whip corals rise up and form in some places downright small forests. Frequently circles a sedentary shoal of barracuda.
Especially on the plateau top a strong current has to be expected. If the diver dares to advance to the edge, especially in the morning hours, the sea creatures encounter who have made this spot so famous:
Depending on the direction of the current you can slowly end the dive at the east side of the reef. Also on this side of the reef there is much to discover.
South of the North plateau at 10 m depth there are some caves, where swarms of glass fish are looking for protection. In 4 meters depth you can enter one of the first through a chimney and exit at the originally entrance.
Not far from the plateau edge the diver reaches a larger coral block which is overgrown with anemones outright. In shallow water unfolds the entire colorful shapes and diversity that characterizes this waters.
West wall with Southern plateau
Opposite the east side, the west side is more crossed by clefts and overhangs.
This creates a lot of hiding places for the reef inhabitants. Remarkable are the collections of anemones with their symbiotically living clown fish, which attract the attention of the diver.
Similar to the east side, the reef wall proceeds to 20 meters perpendicular. Partly it is suspended and continues in 40 meters in a small slope hill. Below the water surface cornet fish can be observed.
Towards the south plateaus blue trigger fish are paying attention, while floating in large numbers close to the reef wall. Around the south end there is a narrow flat strip of water, however, due to the motion of the sea it is too shallow for diving or snorkeling. It is populated with a variety of colorful reef dwellers.
Below this section there are larger caves in the reef wall. The small plateau falls in two stages up to 45 meters deep. At the first level in about 20 meters are some nice vegetated coral blocks. At the level of the second one the area of pelagic big fish starts. Depending on the season there are good chances to encounter various shark species. The outer wall of the plateau vanishes precipitously in the deep blue.