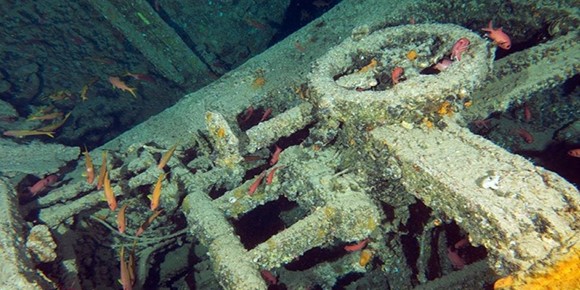 Due to the moderate depth, the wreck can also be dived by beginners. Possible risks come from the sometimes strong currents in this area.

Beacon Rock is a small reef that partially rises above the water surface, located 6.9 miles west of Ras Mohammed, and has a small lighthouse that marks the southernmost point of Sha'ab Mahmud. It was here that the English cargo ship Dunraven, which had mixed propulsion and had been built by the Mitchell & C. shipyard in 1873, sank in 1876 on its way to Bombay.

The wreck, which lies inverted and separated into two parts at a depth of between 15 and 29.5 meters, was first discovered in 1977 by geologist Arye Keller and underwater cameraman Howard Rosenstein. The Dunraven was the subject of a memorable 1979 BBC documentary and subsequently became a classic dive site.

Since the cargo consisting of wood and cotton bales was lost during the shipwreck and the ship caught fire, the wreck presents itself today as a large, almost empty cavern, into which one penetrates through three main openings on the stern, the middle section and the bow.